We have revealed a brand new trailer!

As part of the Upload VR showcase, Developer MyDearest has revealed a brand new trailer for their upcoming VR sci-fi game Dyschronia: Chronos Alternate. The developer's first adventure game, Dyschronia distances itself from the team's previous visual novel games. The first-look trailer shows gameplay footage of Dyschronia, including a closer look at the game's mechanics, controls and its unique characters.

Dyschronia: Chronos Alternate is a science fiction VR title set to release on Meta Quest 2. Players take on the role of Hal, a Special Supervisor in Astrum Close City. A futuristic marine location, Astrum Close City is a place where crime has been eradicated. When the founder of the city is suddenly murdered, Hal must step in and bring the suspect to justice.

Able to access the memories of objects around him and alter the past using an ability called Memory Dive, Hal will have to back up what he discovers with evidence and theories in order to convince others and push the narrative forward. Everything players see could be a potential clue so paying attention and taking in every detail is paramount.

Dyschronia also features free movement, allowing players to move around the game's unique environments to discover and interact with items in order to help with their investigation. No one said being an investigator is easy. Players will also have to deal with the likes of Astrum Close City's Integrated AI. Persuading the AI and winning over the city's citizens is key to solving the mystery.

Dyschronia: Chronos Alternate Episode I is set to release this year on the Meta Quest 2 followed by the Nintendo Switch with subsequent episodes to come later. To celebrate their new trailer, MyDearest have also recently updated their website where players can gain a closer look at Dyschronia's characters, world and story.

In the meantime, stay up to date on the game over on their official twitter account and join the community discussion in Discord where the development team have just launched an awesome giveaway. Additionally, Dyschronia is inviting members of the community to participate in naming some in-game locations starting with the News Broadcast Program of Astrum Close. When the competition ends, one user's name will be chosen and they'll have their name in the game credits. Head over to the Dyschronia Discord for that and more fun activities with the community! 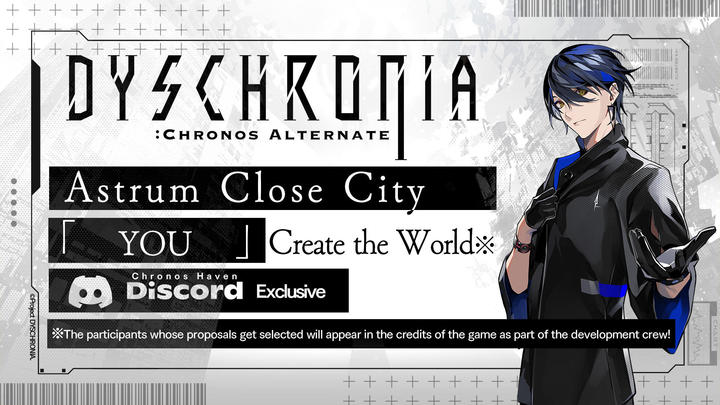